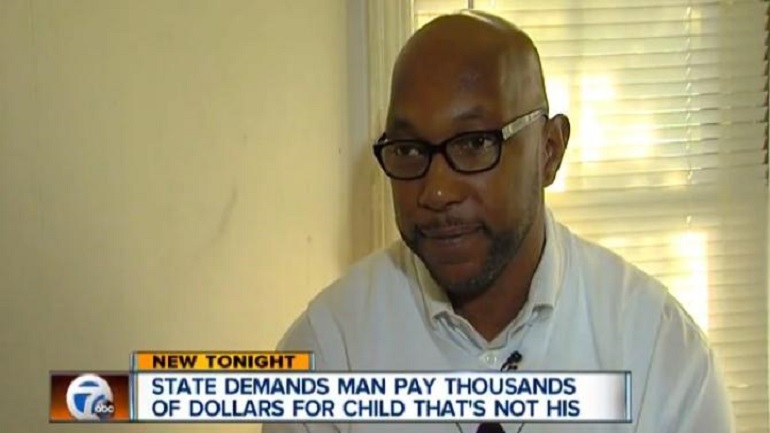 DNA Proved He’s Not The Father, But Courts Say He Still Owes $30,000 In Back Child Support.

The state of Michigan is giving him a choice, pay the $30,000 or go to prison. These are the only two choices he has, even though everyone involved in the story, including a paternity test, the child’s mother and the court, recognize that the baby is not his.

“I feel like I’m standing in front of a brick wall with nowhere to go,” Alexander told Detroit news station WXYZ.

Alexander told the news station that he learned about a paternity case against him in the early 90’s after a police officer called him a deadbeat dad during a traffic stop. The officer also informed him that there was a warrant out for his arrest for unpaid child support.

“I knew I did not have a child, so I was kind of blown back,” Alexander said.

Alexander has been fighting since then to clear his name, with little success. Here is how it went down: the state claims that, in 1987, Alexander fathered a baby. The state also claims that it sent several notices to an address on file and that Alexander ignored these notices. Alexander says that he never got the notices because they were sent to an address where he no longer lived. When he heard about the child, he went to court.

“And when I was telling them in court that it was not my child, they told me it was too late to get a DNA test,” Alexander told reporters.

At the time, Alexander didn’t know the location of the woman who claimed he was the father of the child, and with only sporadic work, lacking a full-time job, he had no money.

He eventually ran into a friend who knew where the mom was, and they got a DNA test. The test proved that Alexander had a 0% probability of being the child’s father. According to the woman, the child’s actual father was also in the child’s life.

Alexander took all of this information to the court, but the judge was unfazed.

“Case closed. I got a pay for the baby,” Alexander told WXYZ.

According to the new station, the court hinged its decision on a summons that was reportedly delivered to Alexander’s father’s house informing him about the paternity case. The process server for the court turned in a document claiming that Alexander was served a summons but refused to sign it.

“I wasn’t there. I couldn’t refuse to sign,” Alexander said.

WXYZ investigated Alexander’s claims and found that on the date the server claimed he served the document, Alexander was serving time at the Michigan Department of Corrections for a crime he committed as a young man.

So how did this happen? Years ago, Alexander’s ex-, had a baby. She did not know who the father was, but she knew she needed help caring for the child. When she applied for welfare, her caseworker told her that she needed to name the father in order to receive assistance.

“That was the only way I could get assistance,” the woman said. She said she had no idea that the state would go after Alexander for child support. “Everything is my fault that I put him through,” she said.

She even asked the court to forgive his debt, and they did, but only the portion that was to be awarded to her. Alexander still owes around $30,000. Alexander is refusing to pay and he is being threatened with jail time.

“We know this is not my child, so let’s do what we need to do, what’s right,” said Alexander.