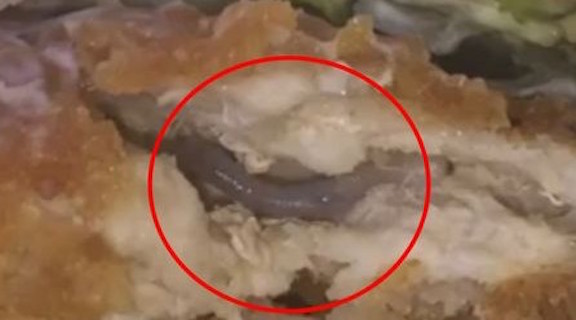 Do You Need More Proof McDonald’s Uses Worms In Their Sandwiches? Well, Here You Go!

Last year DBL brought a story about McDonald’s alleged involvement in using worms as a filler in their hamburgers.

Now, there is another woman claiming to have found worms in her McChicken sandwich.

She says she ordered the food for her and her two children from the McDonald’s drive-through in Jacksonville, Florida.

She took a bite, taste something weird, and pulled the worm out of her mouth.

She said upon closer inspection, she noticed her sandwich contained a purple worm, followed by another worm.

McDonald’s quickly offered a refund for the sandwiches and issued a statement, “Food safety is a top priority and we take incidents such as this very seriously, as it is highly unusual. We quickly reviewed our entire kitchen to ensure this type of occurrence would not happen again.”

McDonald’s told Action News that the chicken did not come from them, but rather from an independent distributor.

Ms. Fedd wasn’t convinced, “There’s no telling what else is in those sandwiches. If it came from the shipping, I’m pretty sure it’s not just one chicken sandwich.”

You can see her story in the video below!