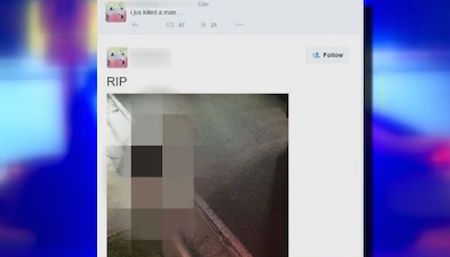 Connie Cole is absolutely distraught after her 16-year-old son was killed when he was hit by a car, and the driver later posted pictures of her sons body on twitter.

“Who does that? You have to be some type of monster,” Cole told WTLV. Cole is now demanding that the 19-year-old driver be charged with a crime. She is also claiming that he should have been tested for drugs and alcohol, though the Jacksonville Sheriff’s office has said that the driver showed no signs of impairment and cooperated with officers. The incident, the indicated, was still under investigation.

Cole said that her son, Trevius Williams, was on his way to get a loaf of bread when he was hit. He was taken to a local hospital, but died before Cole arrived. Following the death of Trevius, Cole was told by her niece the driver had post a picture of the body on Twitter with comments that read, “I just killed a man” and “RIP,” WTLV reports.

Earlier, the same twitter account contained references to drinking “lean,” which is a combination of cough syrup and soda. Both tweets have since been deleted, and police have said that the reference to “lean” was in the lyrics of a song.

“I’m angry because detectives told me that there was no alcohol or drugs involved,” said Cole, who has two other children. “Well, how would you know if he wasn’t tested?”

“I don’t even want to go back home,” the broken hearted mother said. “I got a pack up his close. I got a giveaway his shoes. My son is never coming back.”