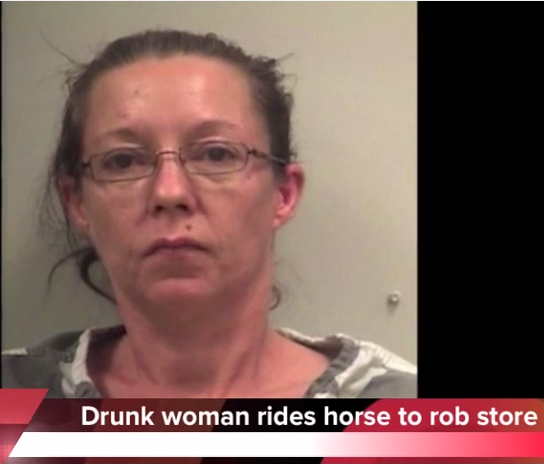 On the evening of Saturday, July 5, police officers in DeKalb County, Alabama received what they thought would be a routine call. Employees of a local business on Hammonds Crossroads called to report a drunken woman causing a disturbance and stealing merchandise from their store. Upon arriving on the scene and catching sight of the alleged looter, however, the police knew that this was no ordinary robbery.

Christine Saunders, 45, apparently abducted a horse outside of a property in the county at some point on Saturday. Saunders then rode the horse to the Hammonds Crossroads location, tied up her four-legged accomplice outside, entered the store to cause a raucous and grab some goods, and then exited the building. Officers arrived on-scene before she and her not-so-trusty steed could ride off into the night.

When officers caught up to her, Saunders was carrying the stolen merchandise and three cans of Keystone Light beer. Since DeKalb is a dry county, Saunders was charged with public intoxication and illegal possession of a prohibited beverage. Saunders ended her big night out by being booked into the DeKalb County Detention Center. The horse was promptly returned to its owner; s/he has chosen not to press charges against Saunders.