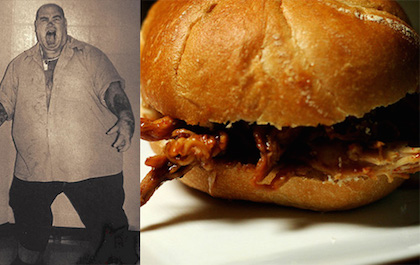 The next time you’re driving down the road and you happen to see an open barbecue stand, make sure you think about this story before you take a bite of that sandwich. You never know what you might be eating!

It all started when Metheny’s wife left him and took their son with her.

Six months later, he was told that his wife was doing crack with homeless men under a bridge in Baltimore. Metheny didn’t find his wife there, but that didn’t stop him from axing her two homeless friends. He then killed three other homeless people while trying to gather information about his wife. He was arrested for two of the murders, but was released due to lack of evidence.

After he was released, he lured two women into his trailer, killed them, and chopped up their bodies. He then opened a roadside barbecue to sell sandwiches made from human flesh. “The human body tastes similar to pork,” he said in his confession.

He lured a third girl into his trailer when he ran out of his “special meat.” Somehow, this one managed to escape. She alerted the authorities, and Metheny was arrested again.

Joe Metheny was convicted of the murders, and he also received a 50 year kidnapping sentence for the woman who got away. In his confession, he says that he regrets not killing his ex-wife. He understands that his rampage started out of revenge, but according to the ruthless murderer, “It ended up a passion for the taste of blood, and the overwhelming sense of power one gets from taking the life of another.”