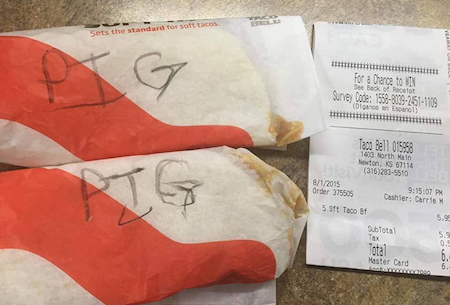 A Taco Bell employee has been fired and the company has apologized for an insult the employee wrote on a police officer’s order.

The unnamed officer and his fiance placed an order at the Newton, Kansas restaurant Saturday and when they received it they found the word “PIG” written on their tacos.

The couple called the manager on duty, who was apologetic and offered a refund and a new order.

Senior Director of Operations for the company, Jeff Graves, told KAKE that the employee was fired and the restaurant is even working with the Newton police on having an event to show their support for the department.

“We do not share the same belief or view as the employee whatsoever,” he said. “Our company, Taco Bell, has always been pro-law-enforcement, military. We’ve always supported the police in our community. Many of our restaurants give police discounts when they come in and eat.”

Graves said he spoke to the couple quickly after learning of the incident.