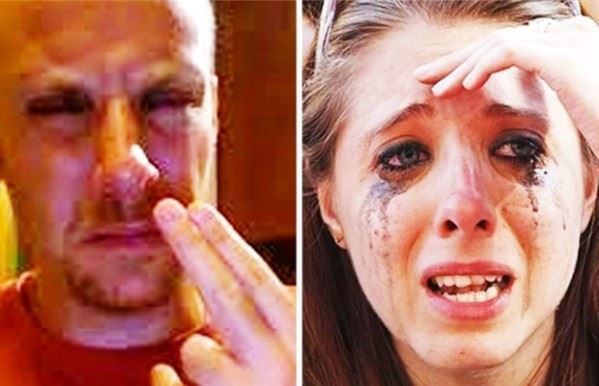 Her Boyfriend Blindfolded Her For A Surprise, Boy What A Mistake That Was!

During lunch at work last week I ate three plates of beans, which I know I should not have done. When I got home, my boyfriend seemed excited to see me and exclaim delightedly, “Darling, I have a surprise for dinner tonight!” Then he blindfolded me and led me to a chair at the dinner table.

I took a seat and just as he was about to remove my blindfold, the telephone rang. He made me promise not to touch the blindfold until he returned and went to answer the call.

The beams I had consumed were still affecting me and the pressure was becoming unbearable, so while my boyfriend was out of the room I seized the opportunity, shifted my weight to one leg and let one go.

It was not only loud, but it smelled like a fertilizer truck running over a skunk in front of a garbage dump! I took my napkin from my lap and fanned the air around me vigorously. Then, shifting to the other leg, I let three more go. The stink was worse than cooked cabbage.

Keeping my ears carefully tuned to the conversation the other room, I went on releasing atomic bombs like this for another few minutes. The pleasure was indescribable!

Eventually, the telephone farewells signaled the end of my freedom, so I quickly fanned the air a few more times with my napkin, placed it on my lap then folded my hands back on it feeling very relieved and pleased with myself.

My face must have been the picture of innocence when my boyfriend returned as he apologized for taking so long. He asked me if I had peeked through the blindfold, and I assured him I had not. At this point, he removed the blindfold and 12 dinner guests seated around the table, with their hands to their noses, chorused, “Happy Birthday.”

It was the most embarrassing event of my life.