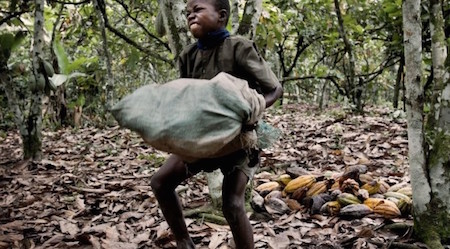 What was one of the better kept secrets of the 21st century is now blown totally open. The three corporations above are responsible for much of the world’s chocolate influx, 60% of which comes out of West Africa.

In 2000, it was revealed that the harvesting and processing of the cacao plant was left to children, often unpaid and living in slavery. Imprisoned, forced to go to the bathroom on the roof or in a cup and malnourished, children would either be sold into it for $30 or be kidnapped, thinking they were applying for some sort of paying job.

The rules and regulations are so lax there that there is no government to step in and stop the atrocities. This horrific state of child slavery is also the perfect cheap labor for candy companies that want to sell you chocolate for dirt cheap prices. Why do you think it only cost $1 for a chocolate bar?

The gruesome depictions of first-hand accounts of slavery; children with whipped backs, afraid for the lives and beaten for months, into submission, was met with immediate congressional action. The chocolate companies pleaded ignorance; Hershey senior vice president Robert M Reese told Philadelphia Inquirer reporter Bob Fernandez that “no one, repeat, no one, had ever heard of this.”

After confirmation that the slavery was indeed happening and that it was as bad as the documentary depicted, US rep Elliot Engel quickly drafted US legislation commanding the FDA to introduce “slave free” labeling on chocolate, similar to organic labeling. The bill immediately gained approval in the House of Representatives and it was on its way to Senate where people were ready to draft it into law. It was then that the chocolate companies stepped in, promising to self regulate the issue, stating that there would be no more child slavery by 2005.

It turned out, they didn’t do much. It’s 2015 and there are now more child slaves than there were in 2001 – 51% more, in fact. There are now 1.4 million children carrying backbreaking sacks of cacao, having their bodies within beaten and crushing themselves from dawn to dusk for no pay. Now that it has become evident that Hershey, Nestlé and Mars have no way of handling the issue, California residents have filed a class-action lawsuit, requiring the companies to pay damages to people that have purchased the product “unwittingly” supporting child slave trade, and also that they print new labels that indicate the product was made with child slave labor.

“America’s largest and most profitable food conglomerates should not tolerate child labor, much less child slave labor, anywhere in their supply chains,” the complaint reads. “These companies should not turn a blind eye to known human rights abuse. Especially when the companies consistently and affirmatively represent that they act in a socially and ethically responsible manner.”