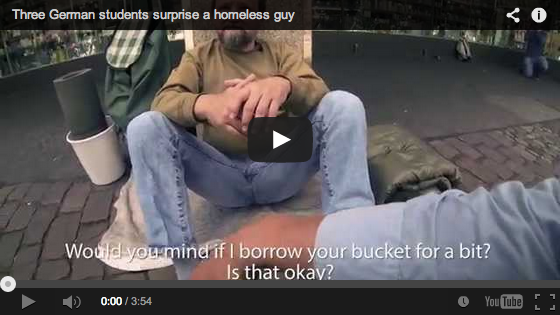 These Guys Helped A ‘Homeless Man’, What happened Next Upset A Lot Of People

Homeless Man In Heartwarming Viral Video Turns Out To Be An Actor.

In a viral video that was created by a group called Be Japy, three students from Offenburg, Germany help a homeless man raise money through their musical performance.

This video has received almost 10 million views and has raised a lot of controversy about exploiting this homeless man for viral fame and publicity. Well it turns out that this homeless man wasn’t homeless at all and in fact was a paid actor.

The group Be Japy’s main mission is to make the world a better place by encouraging donations to numerous causes.

In the clip you see a “homeless” man sitting by a wall. A young man approaches him and asks if he can borrow the bucket he has next to him for a minute.

The homeless man gives him the bucket and he begins to drum. Two of the drummer’s friends come sit down and also start playing and singing. They raise a small amount of money for the man, give it to him and then leave.

Before it was revealed that the homeless man was an actor, there were many comments popping up on YouTube expressing that what they were doing was wrong. Check out a few of them below: 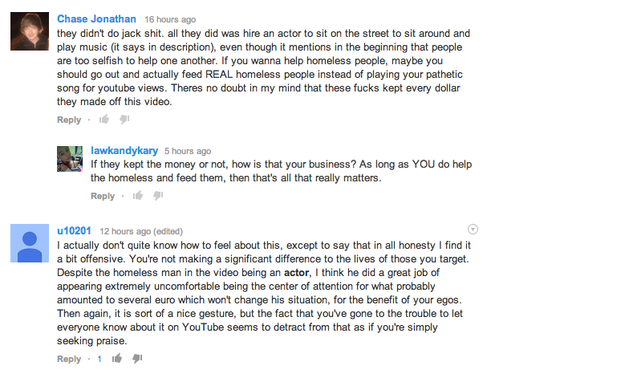 The students ended up writing in the YouTube description, “We could not believe how much of you have analyzed this video in the last few days. There was a lot of praise, but also a lot of critical voices making a particular sore point.” They continued, “In May of this year, we performed like this with more songs and WITHOUT a camera. We liked the message of what we were doing so we decided to turn it into a video in order to encourage others to possibly do the same. Before filming we asked ourselves the following question: Can we simply film a person in distress and put it up on the internet, without asking them or knowing their history? Our answer is quite clearly no, which is why we have hired an actor to take on this role. If we have hurt or disappointed anyone, we are very sorry. Of course that was not our intention.”

So at least this was more of a reenactment of what can be achieved and how to go about it, rather than a “this is exactly what happened” scenario.

I feel like this group’s heart is in the right place, even if it was perceived in the wrong light. Check out the video that went viral below and focus on the message that they are trying to spread.