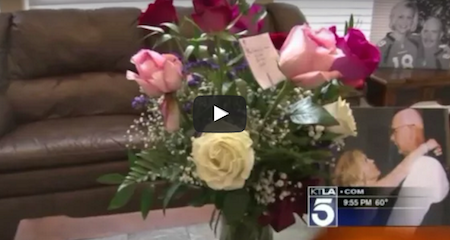 Shelly Golay’s Husband Jim was diagnosed with an inoperable brain tumor.  Jim was the love of her life, and knowing his death would soon arrive was almost more than she could bear.

After he passed away in July 2014, come Valentine’s Day 2015, she thought all she had left of her dear husband were memories. That’s when the doorbell rang – Shelly received flowers courtesy of Jim, her deceased husband.

At first she thought they were from the kids, then she learned the magnificent truth. Jim arranged for Shelly to receive flowers every Valentine’s Day, until the day she dies. “He’s such an amazing man and he can love beyond boundaries. There are no boundaries with him, even in death. He’s just amazing,” Shelly said. “Until the day I die, I’ll get Valentine’s flowers on Valentine’s Day and that’s just a testament of his love all over again.”

Shelly discovered that they were really from Jim when she called the flower shop. Even that exchange was emotional for one of the workers, who said she only saw this kind of thing in movies. “It was true love and you just don’t find that very often, you know. The fairytale romance, the knight in shining armor, you just don’t find that. And even though we didn’t get the fairytale ending, it was amazing,” she says.

Please share this amazing virtue of love with your friends!