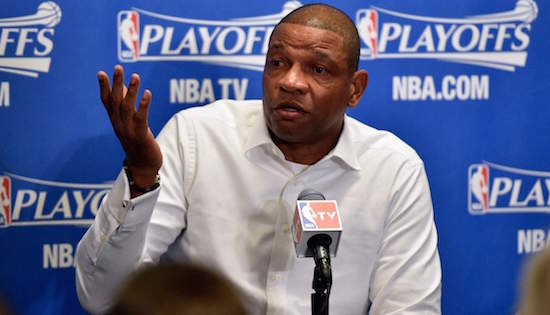 L.A. Clipper’s Coach On Crushing Defeat To The Rockets:  “We Were Drugged!”

During the shocking Game 6 Playoff game between the L.A. Clippers and the Houston Rockets, the Rockets defeated the Clippers in a historic comeback victory.  According to Doc Rivers, Head Coach of the Clippers, “We did not lose.  We were robbed!”

Rivers accused the Rockets organization of drugging his players’ water during halftime.

Up until the 4th quarter of the game where the Clippers led with a score of 92-79, statisticians figured a 94.71% chance for an L.A. win.  However, the Rockets finished the game on a 31-7 run ensuring a Game 7.

The day following the game, more L.A. players reported feeling strangely in the final minutes of play.  “It must have been a slow-acting drug, because I couldn’t tell what was going on,” said L.A. Guard Jamal Crawford.  “I just started feeling game weary and it kept getting worse.”

Rivers sent the team’s coolers and samples of the water to two independent laboratories for testing.  He hopes to have answers prior to playing Game 7.

In a brief statement, Rockets Head Coach Kevin McHale stated his team would never sink to cheating, certainly not by drugging an opponent.