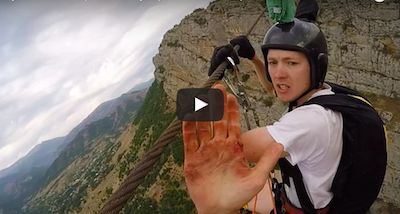 Man Almost Loses His Fingers When He Zips Down A Rusty Wire Bare Handed.

A Russian adrenaline junkie used his bare hands to grab a rusty cable he was zip lining across to try to slow down, leaving parts of his skin and blood behind.

The video shows Sergy Utyugov and another man stand at the edge of a mountain in Nagorno-Karaback. in front of them is a length of rusty metal cable stretching out over a steep valley. The two men rig up some homemade zip line equipment and rocket out over the vertigo inducing valley.

But as the crude zip line gear gathers momentum the pair are forced to grab the cable to slow down, without any gloves. They lost some skin off their palms, but he insists he will “try to avoid a similar situation” on the next trip. That’s probably a good idea.