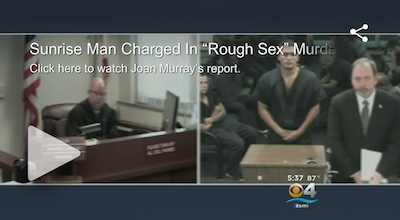 ***WARNING:  Details of the story are EXTREMELY disturbing.

A Fort Lauderdale man claims he accidentally killed his girlfriend after she uttered her ex-husband’s name while the two were having sex in a closet, according to police.

News of Maria Nemeth’s vicious murderer has sent shockwaves through the Collanade Apartment Complex where she was a long time leasing agent.

“People drink but there is no excuse for that,” said neighbor Roy Jones.

“I cannot imagine this happening to anyone especially someone as sweet as this young lady,” said neighbor Dan Carter.

It all started Saturday morning just after 3:30 AM, police said. Fidel Lopez, 24, called 911 and told the operator that his girlfriend was having trouble breathing and was going to die. When police and paramedics arrived at his apartment, they found Lopez calling out for help as he stood next to the body of his girlfriend.

During the walk-through of the apartment, officers found several holes in the drywall, the closet door had been detached and it was lying in a hallway floor and the rear sliding glass door had been shattered. Lopez was taken to police headquarters for questioning. Initially Lopez told police that he and Nemeth had been drinking tequila which led two rough sex, according to the arrest report. Lopez reportedly claimed it was Nemeth’s idea to insert objects “inside of her.” He said she then went to the bathroom, vomited and had difficulty breathing so he called 911.

On further questioning Lopez’s story changed, according to police. Lopez said they had been drinking and were having sex in the closet when she called out her ex-husband’s name – twice. He reportedly told the police that angered him and he began smashing things around the apartment in anger. When he went back to the closet he found Nemeth passed out. Lopez said he began to insert various objects into both of Nemeth’s “private parts” (front and back). Nemeth was so intoxicated she didn’t resist, according to Lopez.

Lopez told police he became a “monster” and inserted his hand into her and began to pull out intestinal matter, according to the arrest report. Lopez said when he was finished, he carried Nemeth’s body to the bathroom and tried to revive her by putting water on her face. When she didn’t regain consciousness, Lopez began to panic and went out to the porch to smoke a cigarette. When he came back to the bathroom, he told police Nemeth wasn’t breathing so he called 911.

Police arrested Lopez who has been charged with first-degree murder.