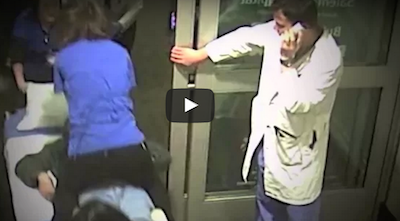 “If it wasn’t for this team at Salem Hospital, I’d be dead,” said John Juras, who was taken to the Oregon hospital after he began suffering from chest pains.

When you see the surveillance footage in the video below, you will have no doubt that their actions clearly kept him alive.

When the medical staff came to his rescue, one nurse performed CPR in the car. Moments later, more staff swarmed the scene and put him on a stretcher.

That’s when another woman jumped on top of the stretcher and continued the CPR while they rushed him down the hallway.

Watch this life-saving moment and share it to give praise to the medical staff for their unbelievable contribution to the sick and dying people in this world!