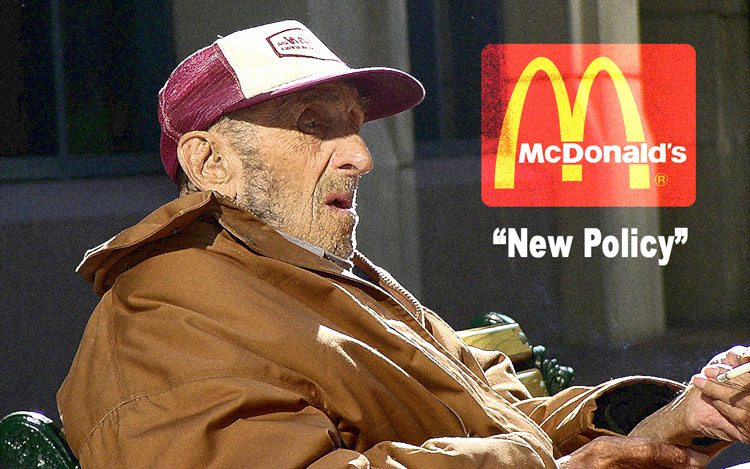 A number of stories have recently come to light, showing that McDonald’s allegedly has a new policy which is preventing customers from buying food for homeless people. In the UK this month alone there have been two separate incidents to make international headlines, where homeless people were denied service at McDonald’s.

The first case involved a 27-year-old landscaper name Daniel Jackson who was almost denied service at McDonald’s because he was wearing dirty clothes and according to the staff he “looked homeless.” Jackson had to explain to staff that he was actually just coming from a hard days work and was not homeless.

“I just clocked off work and was absolutely starving. I did not eat since breakfast so I thought I’d go to McDonald’s for a quick meal. But when I got to the cashier she went to get the manager from the back. He then said he wasn’t going to serve me because I looked homeless. I explained to him I had been at work all day but he said they had a zero tolerance policy on serving homeless people,” Jackson told Manchester Evening News.

Just weeks later, a 19-year-old girl name Charlotte Farrow visited the exact same McDonald’s in hopes of purchasing some food for a homeless man who she saw on her walk to work. She was also denied service and told that it was their policy not to serve homeless people. “We went to the register and the homeless guy try to get some money out before I told him I was paying. Then the supervisor said ‘we don’t serve homeless people’. He said the business manager told them they weren’t allowed to serve homeless people. They said it was a new policy,” Farrow told Manchester Evening News.

“It was his attitude towards the guy – we were both customers so their shouldn’t be any difference. I think it’s absolutely awful and completely immoral. Were all human beings. I wouldn’t expect to be treated like that. If they are refusing to serve homeless people it’s extremely judgmental,” Farrow added.

McDonald’s has continued to insist that this is not an official policy at any of their stores. However, despite their insistent denial, it has been happening in several stores across the world.