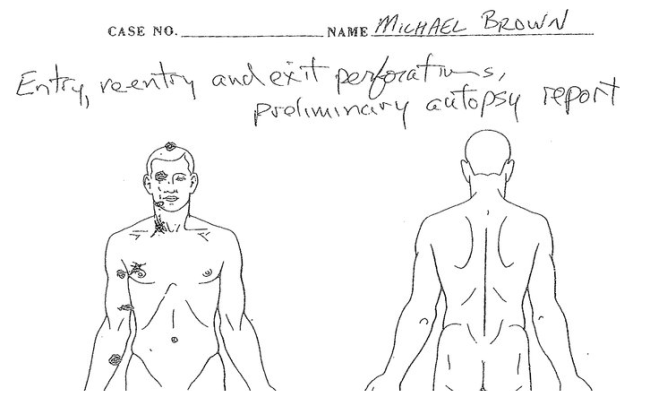 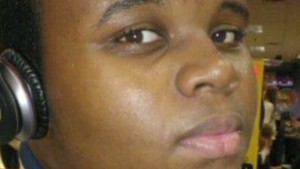 Mike Brown Autopsy Released, Showing He Was Shot 6 Times. The execution of Mike Brown, an unarmed black teenager who was killed by police officers, has been sparking protests around the nation since his death on August 9. According to The New York Times, his autopsy was released on Sunday that shows he was shot at least six times, including twice in the head. The medical examiner’s report states that one of the bullets entered the top of Brown’s skull, suggesting that his head was in a downward position when it struck him and caused his fatal injury, according to Dr. Michael M Baden, the former Chief Medical Examiner for the city of New York, who flew to Missouri on Sunday at the family’s request to conduct a separate autopsy. Brown, 18, was shot four times in the right arm, which indicated that all the bullets were fired into his front. The bullets do not appear to have been shot from close range because there was no gunpowder residue present on his body. However, Dr. Baden did not have access to his clothing to determine whether or not gunshot residue existed there. 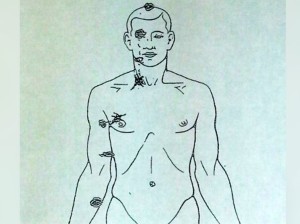 Attorney General Eric H Holder Jr said on Sunday that the Justice Department would conduct its own autopsy due to the “extraordinary circumstances involved in the case and at the request of the Brown family.” The preliminary autopsy results have finally brought the family and the community the many unanswered questions they’ve been waiting for since Mike Brown’s death on August 9. The police department has come under harsh criticism since then for refusing to clarify the circumstances of the shooting and for responding to protest with military style operational gear. “People have been asking how many times was he shot? This information could have been released on day one,” Dr. Baden said in an interview after performing the autopsy. “They don’t do that, even as feelings build up among the citizenry that there was a cover-up. We are hoping to alleviate that.”

Dr. Baden said while Mike Brown was shot at least six times, only three bullets were recovered from his body. Baden has not yet seen the x-ray showing where the bullets were found, which would clarify the autopsy results. Nor has he had access to witness and police statements. Dr. Baden provided a diagram of the entry wounds, and noted that six shots produced numerous wounds. Some of the bullets entered and exited several times, including one that left at least five different wounds. “This one here looks like his head was bent downward,” she said, indicating the wound at the top of Mr. Brown’s head. “It can be because he’s giving up, or because he’s charging forward at the officer.” He stressed that this information does not assign blame or justify the shooting.