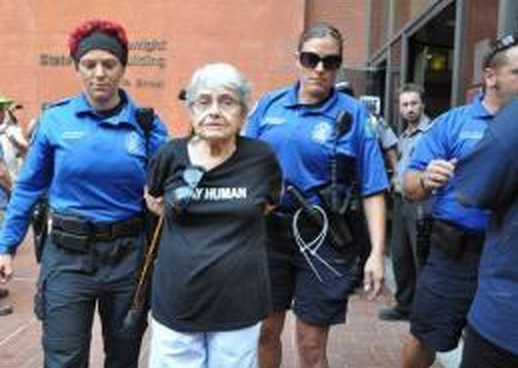 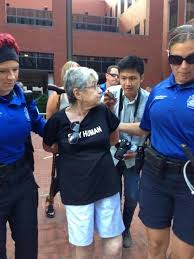 Hedy Epstein, 90 Year Old Holocaust Survivor, Arrested During Michael Brown Protest. Hedy Epstein has been attending peaceful protests since the 1940’s. Being a victim of injustice herself during the holocaust, she understands the importance of  standing up for the rights of human beings. On Monday, Epstein was arrested during a protest in St. Louis over the death of Michael Brown. Epstein, who aided Allied Forces in the Nuremberg trials, was placed under arrest in downtown St Louis, Missouri “for failing to disperse” during protests of Governor Jay Nixon’s decision to call the National Guard into Ferguson. Epstein was arrested along with 8 others.

“I’ve been doing this since I was a teenager. I didn’t think I would have to do it when I was 90,” Epstein told The National during her arrest. “We need to stand up today so that people won’t have to do this when they are 90.” She is currently a supporter and activist of the Free Gaza Movement. Several people have been arrested including a photographer working for Getty Images. The protests increased on Monday night after Nixon announced that the National Guard had been called in to help run the command center while police handled the protests. President Obama addressed reporters on Monday condemning the arrest of journalists that were covering the events in Ferguson since Michael Brown was killed. Obama said they will be monitoring the activities of the National Guard to make sure their presence is “used in a limited and appropriate way.” The President made it very clear that he feels “There is no excuse for excessive force by police.”