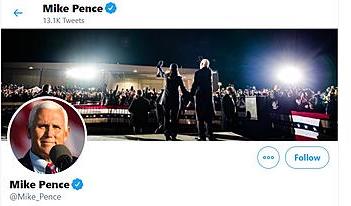 It seems as though, through all of the drama, Mike Pence is finally taking a stand and acknowledging the outcome of the election. If you go to his Twitter page, you’ll see that his banner is now a photo of President-elect Joe Biden and Vice President-elect Kamala Harris.

Trump Encourages His Supporters to March on U.S. Capitol

Trump, during a rally earlier outside the White House, had encouraged thousands of supporters to march to the Capitol to protest what historically have been ceremonial proceedings.

Trump, in a now-deleted tweet, wrote that VP Pence lacked courage, because he wouldn’t do what Trump wants him to do – overturn the votes of U.S. citizens,

Mike Pence didn’t have the courage to do what should have been done to protect our Country and our Constitution, giving States a chance to certify a corrected set of facts, not the fraudulent or inaccurate ones which they were asked to previously certify. USA demands the truth!

Pence is however, stepping up to call out the violence and insurrection of the pro-Trump mob that stormed D.C. and the Capitol, as he tweeted,

The violence and destruction taking place at the US Capitol Must Stop and it Must Stop Now. Anyone involved must respect Law Enforcement officers and immediately leave the building.

The 25th Amendment outlines procedures for ousting the president from office when the vice president and a majority of the president’s executive officers or another body designated by Congress can take steps to declare the commander-in-chief unable to serve. ~ USA Today