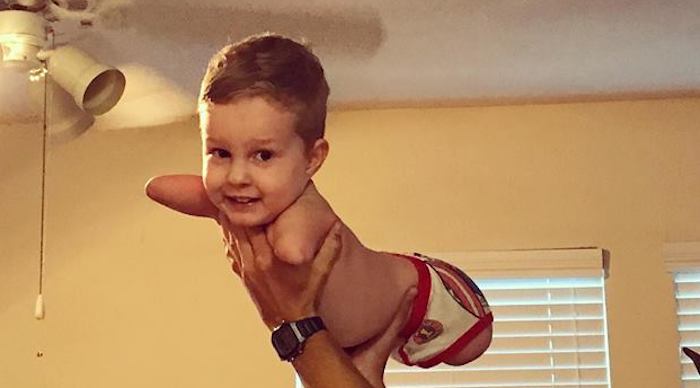 Katie Whiddon and her boyfriend broke down in tears after they watched their 4-year-old son walk for the first time.

You might think that 4-years-old seems a little late for a child to start walking for the first time, but what made this moment so emotional and so special is the fact that the little boy doesn’t have any arms or legs.

Whiddon was only 18 weeks pregnant when she went to the doctor for an ultrasound and received devastating news. Their son, Camden, wasn’t developing any limbs — he was diagnosed with a condition called amelia-phocomelia.

After the diagnosis, the mother of three was afraid that her son would struggle to do even the simplest of tasks throughout life.

“When I first found out he wouldn’t have arms or legs, I thought that he would just be a vegetable … I didn’t know what to expect,” she told People. “I had just turned 19 and I didn’t know, ‘Am I gonna be able to be good enough for him?’ ”

Despite her fears, Camden was going to prove to be an extremely brave, strong, and inspiring little boy. Nothing was going to stop him or slow him down in this world.

“When he was around 2 months old, I had him laying on my bed…I saw him out the corner of my eye and he was hitting the toys with his arms. I started to cry, I was just so happy and that confirmed that he was gonna be able to do things.”

Camden is seen standing in front of Whiddon’s boyfriend, Cole Greene; Greene encourages the adorable little boy as his sister cheers him on in the background.

After sliding across the floor, Camden makes it to his dad and his 3-year-old sister, Ryleigh, jumps in excitement for his big brother. It was such a magical moment that proved to everyone in the room that Camden could conquer and accomplish anything his little heart desired.

During the emotional video, both Greene and Camden are ecstatic because he’s “walking like Nick,” referring to motivational speaker and author Nick Vujicic who was born with a similar syndrome as Camden.

“We started crying, we were so proud,” Whiddon said about the inspiring moment. “I didn’t know when that day would come. I didn’t think he was ready for it yet and I was just so shocked and happy. It was so exciting and Ryleigh was over there jumping, excited.”

Camden’s incredible feat was filmed and posted on Facebook. It has since been viewed and shared thousands of times. Whiddon is confident that her strong and determined little boy is going to do great things in the world.

“Call it mother’s intuition, but I feel like he’s gonna be one of those motivational speakers and now, giving him the exposure will give him a platform so when he’s ready to speak for himself he will have people who actually want to listen to him and care about what he has to say.”

There’s no doubt the Camden is destined for greatness. When you watch the video below, you’ll find yourself tearing up as well.