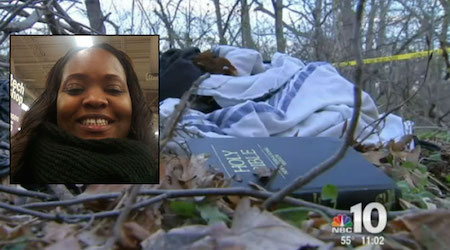 Mom Dumps Her Quadriplegic Son In The Woods With Nothing But A Blanket And A Bible.

A 21-year-old quadriplegic who also has cerebral palsy was found after being abandoned for five days in a wooded Philadelphia, Pennsylvania area.

Police say the young man was dumped and they suspect the person who is supposed to love him the most allegedly left him to die.

Now an arrest warrant has been issued for 41-year-old Nyia Parler who left to visit her boyfriend, John Ferguson, in Montgomery County, Maryland on a bus after leaving her son behind.

A good Samaritan came across the victim where he was lying, covered in leaves, only 100 yards off the roadway, this according to Lieut. John Walker. He only had a blanket and a Bible. The wheelchair was 10 feet away from his body and he had no food or water and was unable to even cry for help.

Reports say the victim attends the School of the Future at 40th Street and Parkside Avenue, and when he didn’t show up for class, the school contacted his mother. The mother told others that her disabled son was safe and he was with her, but that appeared to be a lie.

At this point, Parler is facing a number of charges including simple assault, aggravated assault, reckless endangerment, neglect of a care-dependent person, unlawful restraint, false imprisonment and kidnapping. “We’ve been working all night with Maryland authorities so the county in Maryland we’re working with has assisted us in this investigation,” Walker said.

NBC Philadelphia says the young non-verbal victim is a “fighter” and he does have some family members at his bedside as he recovers. He currently suffers from dehydration, malnutrition, exposure to the weather and a cut on his back. Parler reportedly has another son who is 16 years old who is now staying with family members.