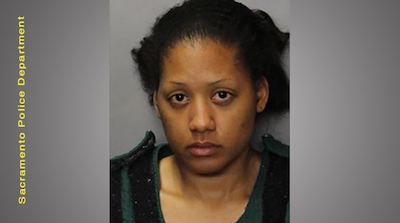 Mom Accused Of Dousing 7 Year Old Daughter With Gasoline And Setting Her On Fire.

A Sacramento woman is accused of trying to kill her daughter by pouring gas on the girl and then setting her on fire.

Neighbors of the suspect, 27-year-old Porsche Wright, said they saw and heard the whole thing, and are still cringing at the gruesome memory.

According to witnesses, Wright has a history of verbally abusing her children. In fact, she has a rap sheet that includes charges of disorderly conduct, domestic violence and prostitution.

A friend was the one who called the cops Saturday night after discovering the little girl had suffered serious injuries at the hand of her own mother. When officers arrived at the scene, they immediately brought in the paramedics, who rushed the little girl to a nearby hospital for treatment.

“She was burned so bad, the skin was peeling off her face and everything,” neighbor Frank Taylor told local news station KTXL. “It was really, really severe.”

Thankfully, the seven-year-old little girl is expected to survive. Wright now faces charges of attempted murder and endangering the life or health of a child. The reason as to why she let her daughter on fire is still unknown.