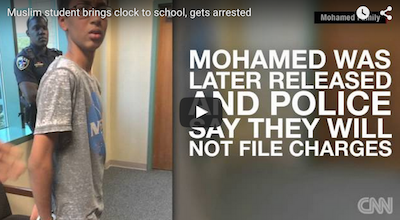 When Ahmed Mohamed went to his high school in Irving, Texas, Monday, he was so excited. A teenager with dreams of becoming an engineer, he wanted to show his teacher the digital clock he made from a pencil case.

The 14-year-old stay ended not with the praise, but punishment, after the school called police and he was arrested. A photo shows Ahmed, wearing a NASA T-shirt, looking confused and upset as he’s being led out of school in handcuffs.

“They arrested me and they told me that I committed the crime of the hoax bomb, a fake bomb,” the freshman later explained to WFAA after authorities released him.

Irving police spokesman Ofc. James McLellan told the station, “We attempted to question the juvenile about what it was and he would simply only tell us that it was a clock.” The teenager did that because, well, it was a clock, he said.

On Wednesday, police announced that the teen will not be charged. Chief Larry Boyd said that Ahmed should have been “forthcoming” by going beyond the description that what he made was a clock. But Boyd said that authorities determined that the teenager did not intend to alarm anyone and the device, which the chief called “a homemade experiment,” was innocuous.

(I’m sorry, but if a white student came to school with a homemade clock, would he have to be so “forthcoming?”)

Outrage over the incident, with many saying the student was profiled because he’s Muslim, spread on social media as #IStandWithAhmed started trending worldwide on twitter with more than 100,000 tweets Tuesday morning. The school’s Facebook page is boiling with sharp criticism of the way the teen was treated, and the hashtag #EngineersForAhmed is gaining popularity.

President Barack Obama and thousands of others are showing support for Ahmed. “Cool clock, Ahmed,” Obama tweeted. “Want to bring it to the White House? We should inspire more kids like you to like science. It’s what makes America great.”

Cool clock, Ahmed. Want to bring it to the White House? We should inspire more kids like you to like science. It's what makes America great.

The president would like the teen to join him and other scientists next month for the White House’s Annual Astronomy Night, White House Press Secretary Josh Earnest said Wednesday.

When Ahmed was called out of class, he said he was brought into a room with four police officers, one of whom said, “Yup,that’s who I thought it was.” Ahmed told the Dallas morning news that he felt aware of what he looked like and his name as the officers fired questions at him. He recalled that one officer said to him, “So you try to make a bomb?” He disputed that and kept telling him he’d created a clock.