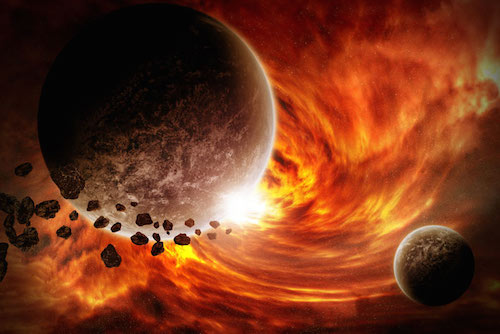 The sun has sprung a cyclone of terror: A hole in the topmost layer of the sun and its magnetic field, the size of 1,000 earths, is letting loose an ultrafast solar suction that is reportedly drawing in our galaxy towards it.

The image, from NASA’s Orbiting Solar Dynamics Observatory, reveals the enormous hole taken at an ultraviolet wavelength unseen by the human eye.

The gap in the sun’s magnetic field is sucking in particles traveling at up to 500 miles per second, and scientists say we will see a major catastrophe this summer because of it.

The dark holes normally form over the sun’s poles and lower latitudes, more often when the sun is at a less active point in its 11 year cycle. They are areas within the sun’s outermost layer which are lower density and cooler – that, plus the weakened magnetic field, lets the plasma and charged particles that make up the hole create a vast section in a solar wind storm.

If aimed towards Earth, which is expected by April 2016, that spells the making of a catastrophic storm: a phenomenon that will affect the Earth’s orbit and gravity which hold it in place. 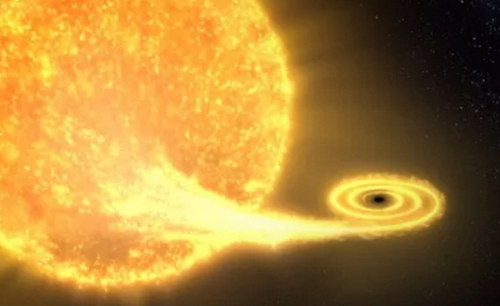 “This may be the largest catastrophe since the extinction of the dinosaurs,” said Michael Griffin, researcher for NASA’s Near Earth Object Program. “I’ll say it so you can understand it in layman’s terms. There’s a giant hole in the sun and it is sucking up everything in its path. The closer it pulls us in, the hotter it’s going to get.  You can try to prepare all you want, go underground, build bunkers – but the reality is, we are going to get sucked up and the closer we get to the sun…. well, you figure it out.”

Griffin says we can expect to see temperatures rise in April 2016 with extreme heats and hottest temperatures on record for this summer of 2016. Griffin adds, “The only chance we have is to hope that the sun repositions itself and we fall out of line with this ultrafast solar suction. There’s a small chance it will happen, but there’s still a chance.”