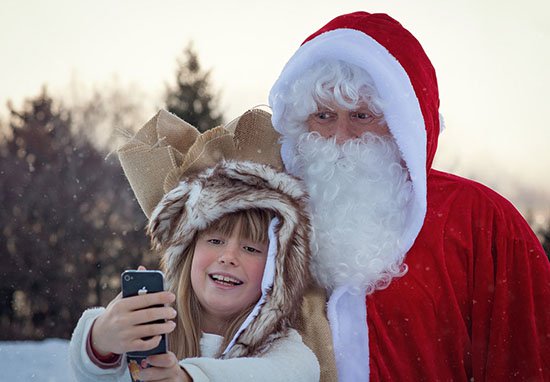 Father Christmas is the man synonymous with the globally celebrated festive holiday. The man at the forefront of our childhood memories, causing children up and down the country sleepless nights around the festive period. The man who could possibly be no more…

But may we have to start referring to our beloved Father Christmas by a whole new name?

2018 has seen the rise of the term ‘gender fluid’, a concept some portions of society have continue to be challenged by, but one that has seen great strides in its social and cultural understanding – the idea a person doesn’t necessarily identify as having a fixed gender regardless of their biological make-up.

Problems occasionally arise in society when accepted norms are challenged and people feel their way of life is being threatened. Unfortunately, gender-fluidity falls into the ‘threatening’ category for a lot a people – turns out – there are some who see the idea of Father Christmas being renamed to something more gender fluid like ‘Person Christmas’, as a real threat to their way of life.

For a lot of people, the first question which springs to mind is: Are we really living in a world where we’re unable to refer to a Saint and more importantly, a much-loved traditional festive figure as male for fear of offending a portion of society?

It turns out some people think it’s a good idea, after all this year has seen companies like John Lewis get rid of boys and girls labels in their children’s clothes.

While many adults would sit and argue ferociously about having a gender fluid figurehead for the Christmas holidays, the more important question to be asking is why we’re using children – in particular childhood figures like Father Christmas – as a battleground for concepts adults are still debating?

Just to clarify, we’re talking about Father Christmas, the figure who grew out of traditions surrounding the historical figure Saint Nicholas. The American Santa Claus has one source – he originated from Dutch settlers’ stories about Sinter Klass – the Dutch name for St Nicholas and how he gave presents to girls and boys.

St Nicholas was Bishop of Myra, in Turkey in the 3rd century AD, who would travel in his red bishop’s robes and give gifts to the poor. Traditionally, across books, television and even Coca-Cola trucks, Santa Claus is depicted as a chubby old fella, who (with the help of his trusty reindeer and Mrs Claus) dresses in a red outfit, delivering presents to children across the world on Christmas Eve.

There’s a myth out in the big wide world about how Coca-Cola turned Santa red and white to match their own brand’s colours as a marketing scheme many years ago.

Turns out the Bishop of Myra, St Nick himself, donned red and white robes all the way back in 3AD and we’re pretty certain his choice of clothing wasn’t anything to do with Coca-Cola’s use of his visage in advertising – the BBC can back me up with this little fact.

For starters, the iconic beard would need to go, and then how would shopping mall Santas the world over disguise their true identity from hordes of kids that queue to meet the man who brings them so much joy? Would we need to start calling snowmen and snow-women, snow-people? OK, we get that one, but what about Rudolph and his infamous Christmas jingle?

Do we now sing the line:

And if you ever saw him/her…

Or is it simply changed to:

And if you ever saw them…

Are animals, even anthropomorphic animals, now ‘its’?

The argument opens a big can of Christmas worms.

However, Claudia Carvell, from the LGBT Foundation, told UNILAD, regardless of Santa, we need more gender fluid representation:

Gender fluidity is an important issue for everyone, regardless of their gender identity – it shouldn’t just be a LGBT issue.

The conversation just starts with gender-neutral clothing lines or gender-fluid imagery, we need to be hearing more of the voices and experiences of gender-fluid and non-binary people.

In Western societies we’re fixed on binary gender roles – but we need far more representation for non-binary and gender fluid people, and ‘they’ pronouns instead of just he’s and she’s.

We have a restrictive idea of what a man or woman is and it assumes women have to be feminine and men masculine – and there’s no room for people who feel they’re both or neither.

Everyone experiences these gender pressures, whether they’re LGBT or not, so gender fluidity is something we all need to be discussing.

We’ve already seen how a couple have decided to raise their son gender fluid and stated they’ll let the child decide on their gender when they’re older.

Star Cloud’s parents, Nikki and Louise Draven, said they want their child to be able to explore ‘both sides’ of the spectrum and thus, allow the child to discover their gender uninhibited.

The child’s biological mother, Nikki, identifies as both male and female and Star refers to the parent as ‘dad’, although Louise, who is transitioning to female, is Star’s biological father.

Some will argue this is, again, grown ups forcing adult and complex issues on a child while others will say it’s just a forward-thinking way of parenting.

The argument will always boil down to what we stated at the very start of this article: Are societal norms being challenged and how do they practically affect people’s way of life?

Initiatives from companies like London Underground, choosing to scrap their announcements such as ‘good morning ladies and gentleman’ to simply say, ‘good morning everyone’, are a step in the right direction to make everyone feel welcome and included. It doesn’t affect anybody. It’s just background noise which doesn’t needlessly identify only portions of society.

What do you think about this possible move for future Christmases? Is it a much-needed stride towards gender fluidity becoming an accepted norm or a dangerous step towards a generation of seriously confused children?

Regardless, we need to see a lot more ‘they’ as opposed to ‘him’ and ‘her’. Perhaps, rather than scrapping certain characters we need to introduce new ones that can exist alongside to better reflect the concept of a spectrum.