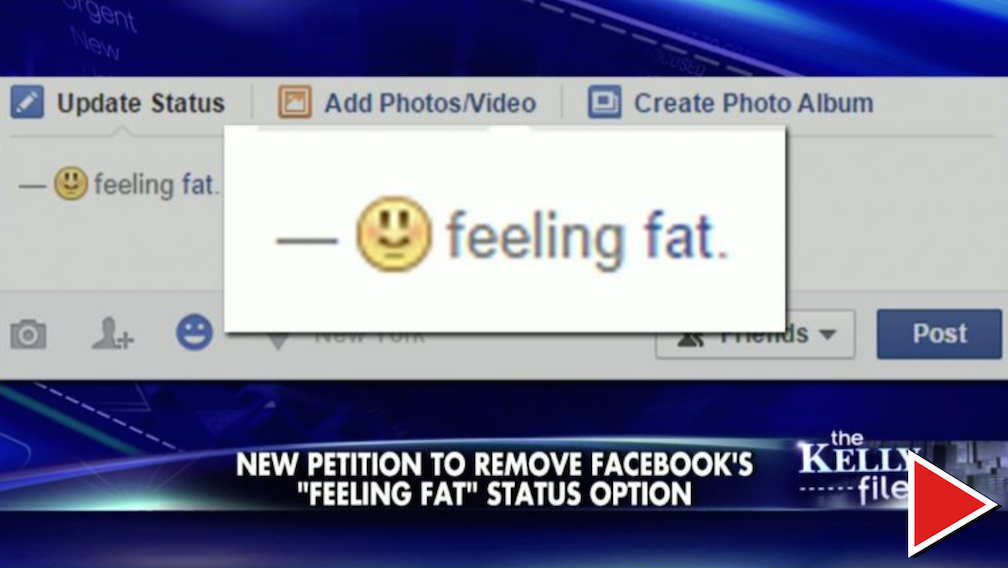 Did you eat too much last night? Or, are you feeling a bit bloated today ladies?

Well, you may not be able to let any of your Facebook friends know about it if these 16,000 people who signed a petition against Facebook get their way!

These protesters have signed a petition urging Facebook to eliminate its “feeling fat” status option.

The group Endangered Body’s claims that the phrase can be seen as making fun of people with eating disorders.

It also argues that the phrase endorses self-destructive thoughts.

When Facebook users set their status to “feeling fat,” they are making fun of people who consider themselves to be overweight, which can include many people with eating disorders. That is not okay. Join me and asking Facebook to remove the “fat” emoji from their status option.

Fat is not a feeling. Fat is a natural part of our bodies, no matter their weight. And all bodies deserve to be respected and cared for.

Facebook is the most popular social networking site in the world right now. With 890 million users each day, it has the power to influence how we talk to each other about our bodies. I dream that one day the platform will actively encourage body positivity and self-esteem among its users, but for now, all I ask is that it stopped endorsing self-destructive thoughts through seemingly harmless emojis.

Please sign to demand that Facebook removed the “fat” emoji from its status options and stop encouraging negative body image among girls.

Facebook reportedly has no plans to change their emoticons.