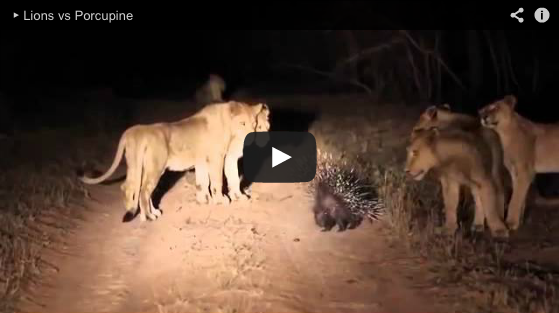 A Porcupine Versus 17 Lions, Who Do You Think Will Win?(VIDEO)

Survival of the fittest, more like survival of the smartest. In this YouTube video that was posted last week, you can see a pride of 17 lions surrounding a lone porcupine at the Londolozi Game Reserve in South Africa.

Lucien Beaumont captured this amazing footage of the porcupine warding off the lions. “This is not an ideal place to be, especially if you feature on the menu of a lion!” wrote Lucien Beaumont on the reserve’s blog site.

The porcupine made it safely away from the lions plate that night and Beaumont goes into greater detail on the blog: “The porcupine began to run backwards into any lion that would come too close for comfort, a common defense mechanism for a threatened porcupine. If the porcupine manages to get close enough to a predator, it does not shoot its quills as many people may think. Rather the quills have micro-barbs, which hook into the face or paws of a predator that may get too close. The quills simply pull out of the porcupines skin without causing damage to the prickly creature. The predator then has to deal with a painful quill.”

Check out the video below, share it with your friends and let us know what you think: