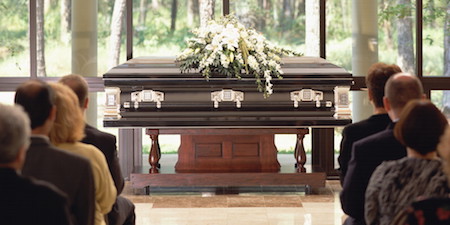 A grieving family was disgusted when a hard-core pornographic clip was accidentally played at the funeral of a father and his newborn son.

Mother Amanda, who was also in the car, was pregnant with Simon Lewis Jr. She was able to give birth to the baby boy but he did not survive.

Hundreds of family and friends were horrified after the video played during the service. “It was absolutely disgusting, the priest turned around to play the video of Simon, but instead a hard-core pornographic video was played on the big screen,” one mourner recalled to Wales Online. “Everyone was in shock, Simon’s father-in-law was serious, he shouted at the staff present and told them to turn it off.”

“It took them nearly 4 minutes to turn it off, people couldn’t believe what they were seeing. To the priest’s credit, he handled it extremely well. He apologized on behalf of of Cardiff Council and said that in 30 years of doing the job, he had never seen such filth.”

Rev. Lionel Fanthorpe, who led the service, described the moment the footage appeared on the screen to Wales Online. “I looked at my congregation instead of the TV screen, but when I heard the noise and members of the congregation moving towards the screen, I realized something was wrong,” he said. “This was not what anybody could have ever imagined or wanted. Thankfully an engineer came to fix it and turn it off. It seems to be some kind of electronic accident.”

A spokeswoman for Cardiff Council, which runs the crematorium made the statement: “There were four television screens used to play visual attributes as part of this funeral service. The television screen which showed the inappropriate content was recently installed, replacing a screen which was broken. We are trying to establish if the new screen, which is a smart television, could have accepted or picked up a broadcast by accident via Bluetooth or across a Wi-Fi network. The other three screens which aren’t smart TVs were unaffected.”