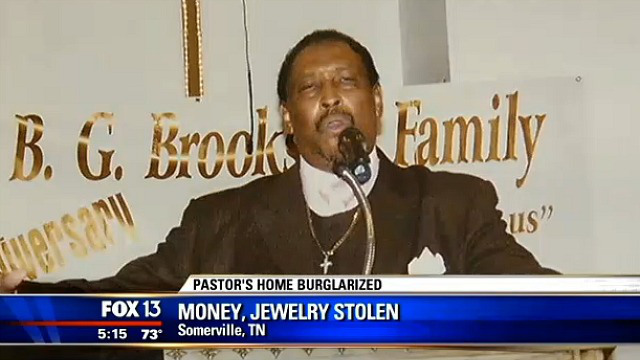 “Give and it will be given to you,” preachers tell you every Sunday.

But it seems this pastor was using people’s tithe and money to benefit his own cause – GREED!

A Tennessee pastor’s home was burglarized while he was preaching Palm Sunday services.

His joyous Palm Sunday was cut short when pastor B.G. Brook’s daughter, Stephanie Brooks, came home to find that thieves had taken an entire safe, filled with money, jewelry and expensive guns from their home while they were gone.

“Over $100,000 cash and jewelry. But he doesn’t buy little rings ’cause his hands are so big, very beautiful jewelry,” said Stephanie Brooks. “The first thing I do when I come up, I go to my mom and them’s room because of the safe, because it’s been stolen before. So, there is not one in there. It’s gone.”

While the Fayette County Sheriff’s investigator has made no comment other than to say that they were looking into the case, the sloppy evidence of handprints and drag marks will surely lead to an identification soon.

Neighbor Calvin Watkins has a few ideas of his own concerning clues to the identity of the thieves, most tellingly, the fact that there were likely several needed in order to lift the safe.

“A safe weighs a ton,” he said. “So, it had to have been at least four or five guys – and they were young guys because I don’t believe an older guy would do this.”

He also noted that the thieves had given themselves away in disarming the home alarm. “They had to run immediately to that alarm,” Watkins said. “That one or that one, in the bedroom or the one out the side door, to know the code and go ahead and reset it then.”

Stephanie Brooks said that this was the second time in three years they had been robbed, though the stolen goods were not recovered the first time because they had been burnt up as the robbers tried to use fire to get into the safe.

In the meantime, Pastor Brooks has remained positive, focusing on the spiritual rather than the material.

“He’s a man of God, and he’s like, God will provide,” Walken said. “If something gets taken away from me, the Lord will bring it back.”

My question is, did this “preacher” have a job other than preaching? It seems like a pretty extravagant lifestyle. I know many people tithe, while struggling financially, believing God will “give back to them.”

Do you believe this preacher is a scam artist and a thief, taking advantage of naïve people?

Or is it his right to pay himself an extremely high salary while his flock may be struggling?