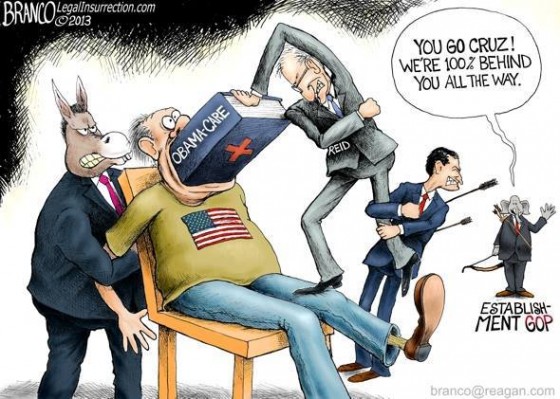 Ted Cruz first gained national prominence with his election as a junior Senator in 2012.  Senator Cruz identifies himself as a Republican and a member of the Tea Party movement.  But is he something else?

“Cruz is a political mastermind!  Analysts may question his logic, but no one is questioning his loyalties.  He is seen as a headstrong, unwilling to compromise conservative.  However, when you look beyond his speeches, beyond his interviews, you’ll find his actions demonstrate a single motivation to further the Liberal cause.”

Ms. Pollster, whose hobbies include reading the Huffington Post and cuticle care, studied Senator Cruz’s brief tenure as a U.S. Senator for her senior research paper.  Titled “Cruz-ing for a Bruising”, the paper compares the Senator’s stated intensions which the actual outcomes of his actions.

“It starts with the Federal Government shutdown of 2013,” says Winnie.  “Cruz, acting like he wanted to repeal Obama-care, helped orchestrate the 15-day shutdown of the government.  Not only was Obama-care untouched, Republicans took a hit in polls while Democrat ratings were unchanged.”

Cruz’s next major act of sabotage happened this past December. By objecting to single spending bill, he allowed 24 Obama nominations to be confirmed including the controversial appointment of Surgeon General.

As Winnie says, “No one would ever suspect Cruz was working of the other side.  On the surface his actions support his Tea Party agenda 100%.  Only by focusing on the results can we find his left-leaning beliefs.”