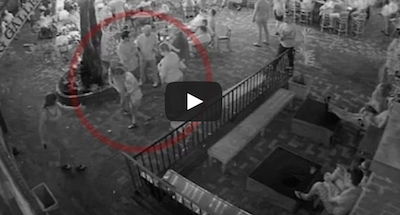 She Thought She Was Hit By Fireworks, 5 Days Later Doctors Find Bullet Lodged In Her Thigh.

Heather Charlebois, mother of four, was enjoying a night out with her friends in Florida on 4th of July when she suddenly felt a pain in her leg.

Thinking she was struck by a firework in her thigh, she stood up a bit confused as friends helped her away from the party.

Her friends took her to the bathroom to get a better look at her leg. They found fluids leaking from a small hole, but not a lot of blood.

Five days later, still in pain, Heather went to the doctor where they found a .38 caliber bullet lodged deep into her thigh.

The bullet was very close to her  femoral artery, so they decided to leave the bullet in rather than remove it.

According to police, “There was no indication a gun was fired in close proximity to where she was sitting at this point. We are under the assumption that it was fired into the air from a distance.”

They are not seeking out any suspects at this point.