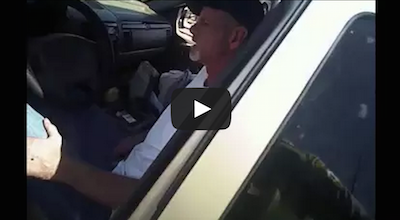 The shooting happened on Sahara Avenue near Lindell Road. A 54-year-old man, James Michael Todora, was killed after shooting and striking a police officer.

Police said Todora immediately got out of his SUV and started shouting at Ofc. Luna to shoot him. Todora Was ordered to come back to the officers vehicle, but he refused and went back to his SUV.

At this point, Ofc. Luna went up to the car and explain the reason he pulled Todora over. While this was occurring, officers Jonathan Lipinski and Brian Kroening walked east to help out officer Luna.

With the suspect becoming very agitated, this event unfolded in tragedy.

You can see the complete body cam footage in the video below.