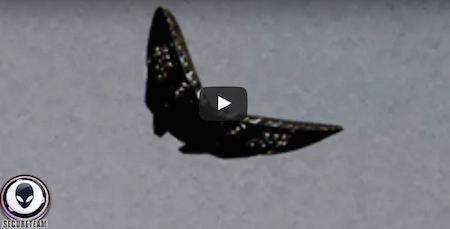 This so-called “black craft” was sited by a father and son who were just leaving a restaurant located on the border of Ohio and Kentucky.

Tom and Christopher, the father and son, had claimed that two “military helicopters” proceeded to follow the strange UFO after they filmed the craft passing by.

Tom, the father who filmed the event, commented on the craft slowly gliding by and then as it reaches a certain point in the video, there is a flash of light that appears on either side of the craft.

This video has sent UFO researchers into a spiral of confusion. We leave it up to you to decide whether or not this is any real evidence of advanced lifeforms visiting earth. Share with your friends and let everyone know what you think of this video!