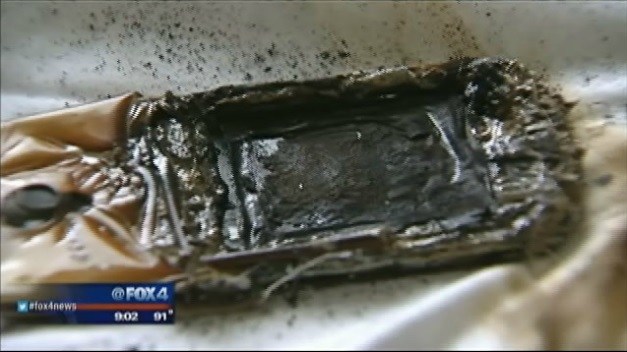 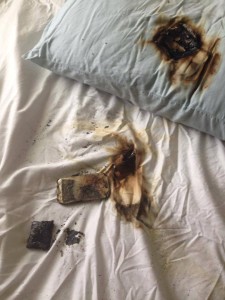 Texas Girl Wakes Up To Cell Phone On Fire. We have reported incidents like this before where people get burned and electrocuted by their cell phone. And it’s happened again. Ariel Tolfree is okay, but her Samsung Galaxy S4 is not. She slipped it under her pillow before going to sleep, as many of us do, and to her surprise it caught on fire in the middle of the night. The teenager woke up to heat and the smell of something burning. “The whole phone melted,” her father, Thomas told Fox 4 in Dallas. “The plastic, the glass. You can’t even really tell it was a phone.”

What was the problem? It was the battery in her Samsung Galaxy S4. She quickly found out why cell phone manufacturers warn you not to sleep with any cell phone close to you. Ariel’s dad believes the Samsung Galaxy S4 overheated, and cause the battery to swell and start a fire. The family has contacted Samsung, who said their products are safe, but they might know what caused the phone to burn. The battery inside was a replacement battery and not the original Samsung Galaxy S4 part. Samsung told the family and Fox 4 they believe there is a need for consumer education when it comes to rechargeable batteries. “That’s exactly why they post a warning on their user guide, which specifically states, covering one of their devices with bedding and or material could restrict airflow and cause a fire.” Samsung did say they would replace the bedding, mattresses, and pillow and asked the phone be sent off so they could fully investigate.