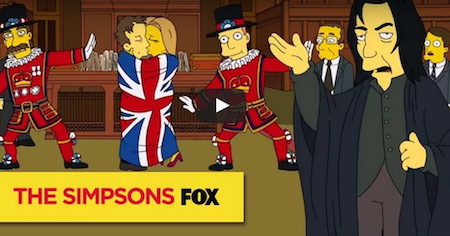 When The Simpsons writers created this episode in 2013, they had no idea what would unfold three years later.

On February 10, 2013, ‘The Simpsons’ aired a Valentine’s Day themed episode that included a bit featuring David Bowie and Alan Rickman in it, unknowingly creating a tribute to the two British icons, who died within four days of each other, three years ahead of schedule.

The bit features Rickman as his “Harry Potter” character, Severus Snape, and the David Bowie penned song, “All the Young Dudes.”

Does a writer on ‘The Simpsons’ own a DeLorean? WEIRD!!

Check out this epic tribute in the video below: