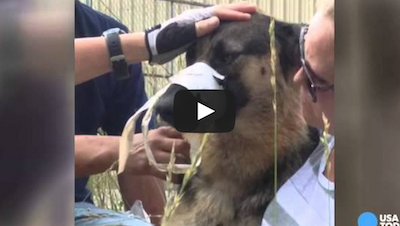 They Found This Poor Pup With Her Mouth Taped Shut, But What This Man Does For Her Is Heroic

I can’t imagine what would make someone be so cruel to an animal.

Unfortunately for this eight-month old German Shepherd, she was put in the hands of an abusive human being.

Commuters in Denver, Colorado, found this poor puppy with her mouth taped completely shut and her legs taped together.

She was absolutely frightened, but strangers were able to calm her down until Animal Services arrived, gently removing the tape from her body.

Watch the video below about this poor puppy who was saved by good Samaritans. Hopefully she finds a great home!