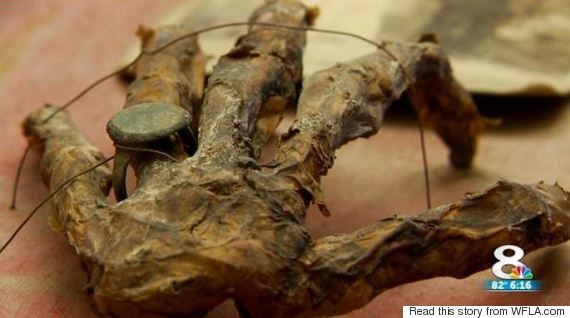 They Were Looking Through Their Grandparents Attic, But NEVER EXPECTED To Find THIS!

I guess when you’re searching through an old attic, you could expect to find many unique things.

However, I don’t think they were expecting to find THIS when they were searching through their grandparents belongings.

Mike Lopez told NBC affiliate WFLA that his sister was cleaning out their grandparents attic when she found a wooden box with a wedding photo of their great-grandparents, a Tampa area map, some coins and what appears to be a human hand all arranged inside.

The map shows the word “Gaspar.”Lopez told the news station he thinks it may be connected to the legend of a late 18th and early 19th century Florida pirate José Gaspar, who was also known as “Gasparilla.”

Despite Gaspar’s place in Tampa area culture and folklore, there is no proof he was real, and the myths may have originated with a railroad company advertisement in the late 1800s, according to the Tampa Bay times.

“Well, that certainly is a hand,” Tampa Bay History Center Curator Rodney Kite-Powell says in footage from the news station. Kite-Powell Said the treasure map is likely a blueprint from the early 1920s or 1930s, and the claims look too thin to be authentic Spanish treasure, or even very old.

“I just don’t know what to make of it aside from the fact that it’s probably not José Gaspars hand,” he said.

while the hand appears to be real, experts to have seen it are still uncertain. “The jury is still out,” WFLA reporter Jeff Paterson says in the video below.