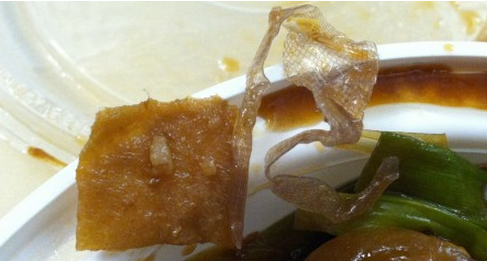 Used Band-Aid Found In Chinese Fast Food. Are fast food restaurants in competition with each other to gross us out? I mean it just keeps getting worse and worse! A man who ordered Chinese take-out received an unsavory surprise in his lunch when he attempted to bite into his ginger chicken. It wasn’t until the band-aid was in his mouth that he realized something was horribly wrong. By the looks of the photo he took, the bandage appeared to have been cooked with the meal. Part of the plastic had been peeled away from the cloth.

“I got my money back, but I feel really grossed out,” He told Huffington Post in an email. “The pad looked exactly like the chicken in the sauce.” He said although the restaurant offered him a refund, they would not explain how the band-aid got into his meal. One thing is for certain though, he will not be eating at this Chinese restaurant ever again! CLICK HERE —> TO LIKE DAILY BUZZ LIVE ON FACEBOOK!