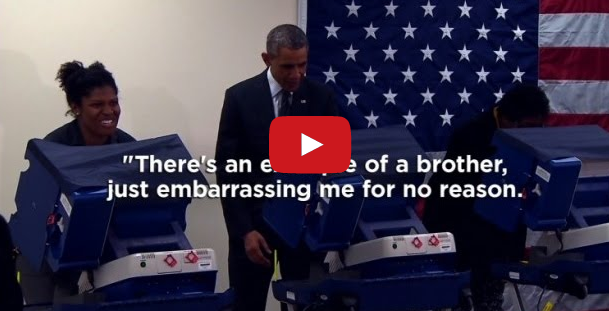 Like many other Americans, President Obama headed to the voting booths early in the city of Chicago.

But I don’t think he was expecting the type of comment he would receive from the boyfriend of a girl who was in the voting booth next to him.

On Monday, as Obama was casting his ballot, he stood next to Aia Cooper and her fiancé, Mike Jones. Jones took the opportunity to joke around with the president, and Obama’s reaction was priceless.

“Mr. President, please don’t touch my girlfriend,” Jones told Obama as he walked by the president.

“I really wasn’t planning on it,” Obama replied.

Cooper said she was afraid that her boyfriend might say something to embarrass her.

“I am sorry, please excuse him,” Cooper said.

Obama then told Cooper that her boyfriend was “an example of a brother just embarrassing me for no reason.” The president added, “I can’t believe Mike, he is such a fool.”