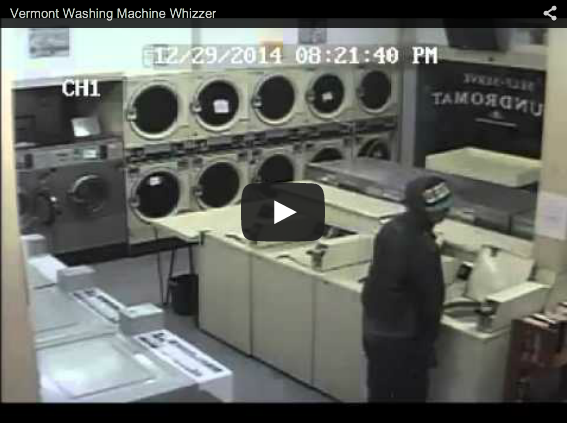 VIDEO: Man Pees In Laundromat Washing Machine In Vermont. Most animals wouldn’t even do what the young man does in this video. Now the video isn’t funny enough to make you pee your pants, but at least someone pees somewhere..

The video was shot in Vermont at a local laundromat named the Waterbury Laundry & Dry. In the video you see a the man acting very suspicious as he approaches the washing machine and unzips his pants.

At this point you know exactly what this guy is about to do, but he didn’t seem to realize that he wouldn’t be able to reach the top of the washing machine. After realizing he goes and pulls up a chair to stand on, finishing his business.

I will say though at least he put the seat (lid) down like a true gentleman. Authorities released the video in hopes that it would help them catch the culprit. The phone lines were apparently flooded with tips and they ended up catching the suspect.

This is not 100% verified, but according to a comment on the video posted by defender321ful on YouTube, he is one of their classmates and his name is Steven Byrg a.k.a. The Vermont Washing Machine Wizzer. Maybe one day his parents will actually potty-train him, but until then here’s the video for your enjoyment.