Wow, this woman actually looks shocked as police arrested her at the bank. It was all captured on video.

This Georgia woman, Brigitte Jackson, was accused of filing a phony state tax return for $94 million. She was arrested when she attempted to claim her check at a Cobb County Bank.

Jackson was arrested and charged with attempted theft by taking and conspiring to defraud the state, according to an investigator with the Georgia Department of Revenue.

“It doesn’t matter if it’s $94 or $94 million,” Special Investigations Chief John Waites told Channel 2 News. “Were going to go after you and hold you accountable.”

Waites said investigators asked Jackson to come to a grocery store bank counter to pick up her $94 million refund check, and when she did, she was arrested. 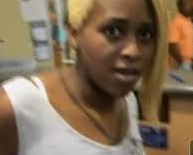 “They kept calling to check on their refund,” Waites said. Those phone calls were recorded, and Waites said that helped investigators bring criminal charges.

And 2014 the Darwin Award goes to Brigitte Jackson! What an IDIOT!