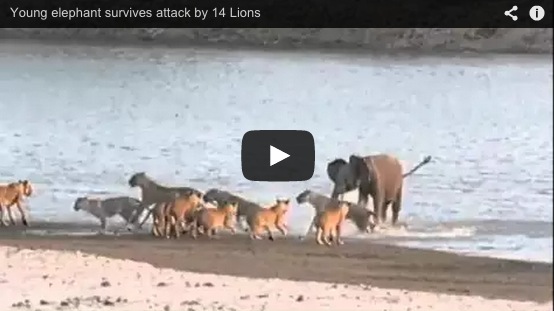 This is the second time in two weeks that I’ve seen a video where an animal has outsmarted a herd of lions. It seems that it’s the king of the jungle who just can’t get a break.

The footage in this video was captured at Norman Carr Safaris Chinzombo Camp in Zambia. It shows a young 1-year-old elephant warding 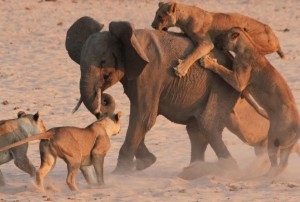 off a pride of 14 hungry lions.

The elephant, who at one point had two lions on it’s back and one going for its legs, is lucky to have survived.

A journalist named Jesse Nash and a group of companions had been on a game drive when they came across this sight.

The situation looked quite bleak at first, but that’s when the elephant started using it’s head and ran for the water, fighting back as he walked.

“Where are the other elephants, for God’s sake?” One onlooker could be heard saying. Well it turned out he didn’t need any help at all.

Not only did the elephant survive, but he also was reunited with his herd.

The spectators also named him “Hercules” due to his tremendous courage.