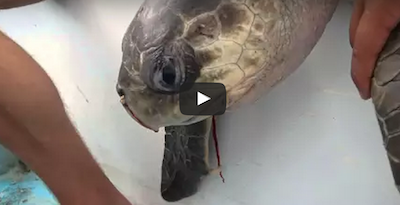 What Pollution In The Ocean Did To This Sea Turtle Is Absolutely Devastating!

An unlucky turtle caught a lucky break last month when a team of biologists saved him from certain death. The team was researching turtles off the pacific coast of Costa Rica, but got more than they bargained for when they brought a grown, male olive ridley sea turtle on board. If you look closely, you can see that the turtle had something lodged in his left nostril.

At first, the team thought it was a worm of some kind that had burrowed its way deep into the turtle’s skull and had possibly attached itself to the brain stem.

But after a few minutes, they quickly discovered it was something entirely different and completely unnatural. “We, just out of biological curiosity, started pulling on it to see what it was,” Christine Figgener, who is a graduate student at Texas A&M studying marine biology, told The Battalion. “And what we noticed was that it was not some sort of animal, but actually something that was made out of plastic.”

After nearly 10 minutes of careful tugging, one of the team members yanked out a 10 to 12 inch long plastic drinking straw from the turtles bleeding nostril.

Figgener Recorded the struggle and uploaded it to YouTube shortly after. It quickly went viral and has now reached 4.9 million views. “For the turtle, the wound would have been fatal had we left the plastic inside its nostril,” Figgener said. “This is the reason why we do not need plastic straws.”

Please be conscious of where you put your trash. What you throw on the ground today has serious consequences for our future.