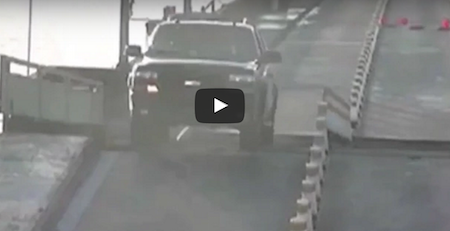 We’ve all been late for work, an appointment, or somewhere where we had to be at a certain time. Maybe you’re like most people, and run that yellow light trying to make up for lost time.

But this guy took being late to another level! I don’t know where he was headed to, but he drove his vehicle through a boom gate and over the gap of an opening drawbridge before landing himself in trouble with the law.

Bridge surveillance footage captured James Montano driving along the bridge in Palm Beach, Florida, when he smashed through the barrier and up the raising bascule bridge.

The 29-year-old cleared the small gap of the still elevating bridge and landed with a crash on the other side where he stopped to inspect the damage to his black SUV. Police say it was not a daredevil act.