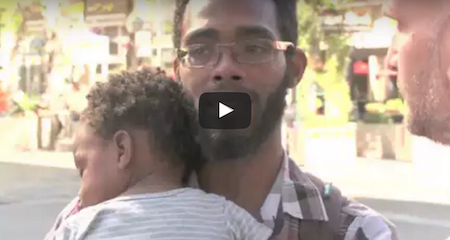 Here’s one of those stories that will make your heart happy today and reignite your faith in Humanity.

James, a single father, and his son became homeless after moving from New York to Denver. After two days of being homeless, James was interviewed by TV host Leon Logothetis during the host’s #GoBeKindTour.

James’s demeanor during the interview is an inspiring one, as he remains grounded and full of love, even when talking about his struggles.

James told Leon, “You have to be brought down to your humblest point so you can appreciate other things that are waiting for you.” And when James was asked how he was able to keep his sense of joy and spirit during this tough situation he replied, “Two things: my son fuels the fire, and the metafusion of meditation and prayer, knowing that there is a higher power.”

You can watch this man’s inspiring interview in the video below: