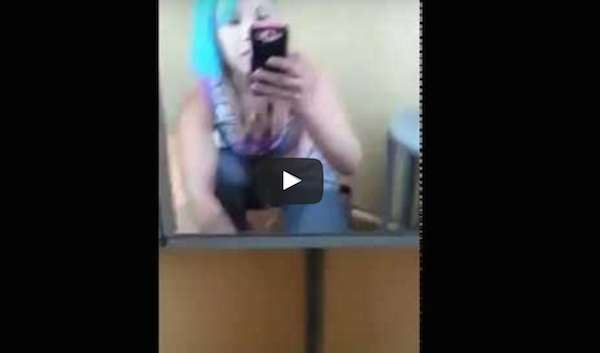 This is information definitely worth sharing and is a concern for anybody that tries on clothing in the dressing rooms at Walmart.

This is very disturbing and an absolute breach of privacy. A woman and her sister were trying on clothes at the Walmart on Wyoming and Academy when they noticed a blinking camera-like light underneath the mirror somewhat concealed.

They asked an associate what it was and immediately he got defensive. One of the ladies told a manager then went back and took this video. A short time after, the power went out and the alarm went off. Coincidence?

It sounds to me like that Walmart might have a pervert manager running the store. Or maybe several associates who are in this together?

Do women have to worry about THIS now? There was a recent story about a gynecologist who worked for Johns Hopkins who was recording the women during examinations with a hidden camera pen he wore around his neck.

Now women also need to worry about every dressing room they go to and possibly the bathrooms. Pass this on to every female that you know.

Let’s get Walmart’s attention so they have stricter guidelines against this sort of thing by thoroughly inspecting the dressing rooms and bathrooms on a regular basis.

SHARE so women can be aware that this is happening!