It one thing to get a DUI while parked in your car, but it’s another thing to openly be drink in front of the cop who is about to give you the DUI.
This is what happened to a 60-year-old Florida woman earlier this month. 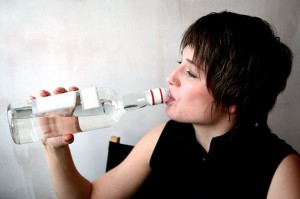 parked car and kept drinking vodka while being questioned by police.
Police got a call around 5:40 p.m. about a woman who “appeared out of it” sitting in her vehicle at the American Legion.

The keys were inside the vehicle according to the affidavit, but the car wasn’t running.
Riney was asked for her license, but instead handed the officer a bag of chips and then a bottle of water.

Once the officer told her that those items were not her license she apparently grabbed the bottle of vodka she had in the car and took a swig.
Riney’s blood alcohol content was more than double that of the legal limit, which isn’t surprising considering she was drinking straight out of the bottle. She was charged with a DUI.