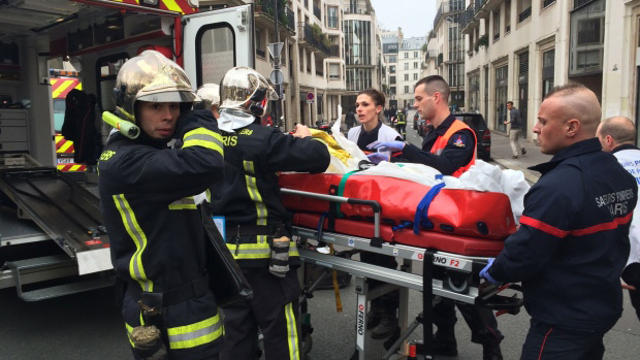 Three gunmen shouting “Allahu Akbar!”stormed the Paris offices of a satirical publication known for lampooning Islam Wednesday, killing 12, including its editor, three political cartoonist and a police officer whose cold-blooded murder at close range was captured on a disturbing video.

According to FOXNews.com, the masked Kalashnikov-toting shooters moved with military precision, and then escaped following the 11:30 AM attack at Charlie Hebdo, the publication known for challenging Muslim terrorists with a 2011 caricature of the prophet Mohammed on its cover and which recently tweeted a cartoon of Islamic state leader Abu Bakr al-Baghdadi, and were being sought.

“We’ve avenged the honor of the prophet!” The killers shouted. According to witnesses who spoke to Sky News. Other witnesses said the men shouted “Allahu Akbar!”, Arabic for “God is great.” The gunman spoke French without any accent, according to Le Monde.

As the killers fled, they shot at arriving policemen. Video, believed to be cell phone footage, quickly emerged of the killers men getting out of a car in shooting a police officer in the head in cold blood as he begged for his life on the sidewalk. After killing him, they jump back in the car and resumed their flight.