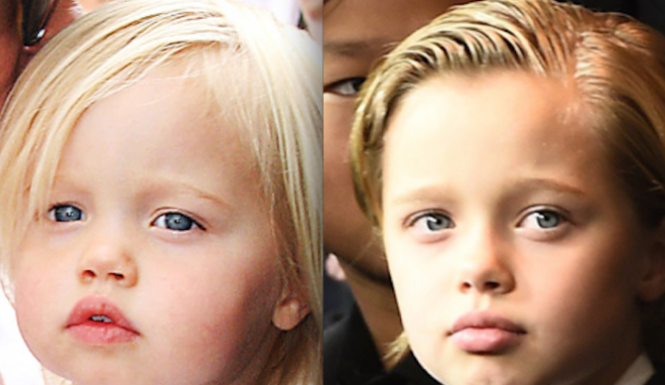 Angelina And Brad Support Their 8 Year Old Daughter’s Decision To Be Called “John”.

Angelina Jolie and Brad Pitt’s 8-year-old daughter Shiloh has been very forthcoming with her parents about her identity. In a recent interview, Brad Pitt disclosed that when he would call her ‘Shi’, she’d interrupt him by saying, “I’m John!”

Now, the whole family addresses her as John, and at her mom’s recent Unbroken film premiere, she wore a suit and tie to match her older brothers Pax and Maddox. Back in 2010, Jolie told Vanity Fair, “She wants to be a boy. So we had to cut her hair. She likes to wear boys’ everything. She thinks she’s one of the brothers.”

I’m sure it was not an easy decision that they made, but this is a decision that Shiloh’s parents feel comfortable with. They want only what’s best for their daughter, now son, “John.”

Of course, lots of girls like the same toys, clothes and games as boys. But what about when a child seems to want to be a member of the opposite sex? Does this hint at gender dysphoria, or identity issues? Or is it just a natural part of growing up?

Linda Blair, a clinical psychologist told The Telegraph it is important not to overreact. “It could be so many other things that I went jump to that conclusion,” she says.

For a child like John, her desire to be a boy could simply stem from having three brothers. “Usually with a child, especially children with older siblings of the opposite gender, it’s normal to want to copy them and be like them,” explains Blair. “That’s quite a normal phase for a lot of kids.”

As a middle child, she is 8 and has two younger siblings and three older ones, it could also be a desire for attention. “A lot of times kids in the middle of a large family are looking desperately and legitimately for ways to get attention. So they will do whatever it takes to get it.”

More importantly, you should remember that experimentation is a normal part of any child’s development. Most three and six-year-old’s are obsessed with the idea of male and female and the concept of mommy and daddy. This is a fascination that can endure for some children.

Accepting your child for who they are is the most important thing that you can do for them. “If your child is very strongly identifying with the opposite gender to the point where it’s causing the child or the family distress, seek help,” says Dr. Ady Davis, a psychosexual therapist with the NortheastGender Dysphoria Service. “Signs of distress in a young person or child can include self harm, destructive behavior and depression.”