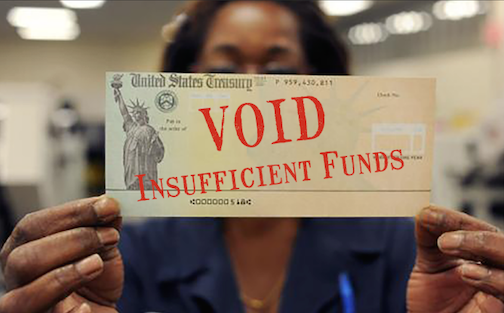 Tax Refund Checks Are Bouncing, See How The Government Screwed Up Big Time!

April 15th looms near, and the Government is not ready.

“Come refund time many Americans will be left empty-handed,” states an unnamed official in Washington D.C..  The high rank official, who refused to go on-record due to security concerns, states IRS reserves have been bleed dry mostly due to the “Earned Income Tax Credit” or EITC.  Once reserve levels reach a critical state, the IRS will have to issue a stop payment command.

EITC is a tax refund/relief program targeted toward families with children.  In 2013, EITC ran up a cost of $56 billion, the third largest program following Medicaid and food stamps.

The difference between 2013 and now, is millions of American’s who were eligible for the refund failed to claim their money.  The GAO (Government Accountability Office) and the IRS calculated the number of families failing to claim to run between 3.5 and 7 million.

Today, those families are asking for their money.  New non-profit organizations, many linked with various government groups, are actively seeking out eligible households to notify them of the EITC and helping them to prepare tax filings.

Due to the increase volume of claims and partly due to the widening gaps in income between the wealthiest and poorest families, IRS reserves are unable to handle demand.

It is now up to highly divided government to make arrangements to pull the U.S. out of another financial crisis.  Given the previous years government shutdowns and Republicans seizing Congress, the source has little hope an agreement will be delivered on time to keep the refund checks coming.