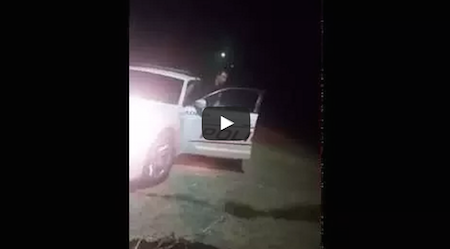 While out for a jog, Talladega, Alabama resident Corey Dickerson decided to take a breather and catch his breath. A father of three, Dickerson was minding his own business, just trying to get in some healthy exercise, when local law enforcement arrived.

Sweaty from his jog, Dickerson wasted no time in taking charge of the situation, refusing to allow himself to become static. “Looks like I’m about to get harassed,” he said to himself, and made sure to record the encounter on his phone – which he makes the police aware of.

Fortunately for Dickerson, he was well aware of his rights. Alabama is a “stop and identify” state, which means the police have the right to “stop any person abroad in a public place whom he reasonably suspects is committing, has committed or is about to commit a felony or other public offense and may demand of him his name, address and an explanation of his actions.”

Even with that law in place, police must have a real reason for suspecting him of a crime. Police cannot just claim that he “looks suspicious”, and Dickerson was aware of that. So, while he is polite and gives the officer his first name, he refuses to produce his ID without reasonable explanation.

You can check out the entire encounter in the video below: